Why, hello. Another quick post, this time in the form of Ciate. Ciate is a British polish brand that isn't sold in the U.S. I actually got this through an international retailer when they were having a free shipping worldwide promotion. Don't know if I would have gotten it otherwise. 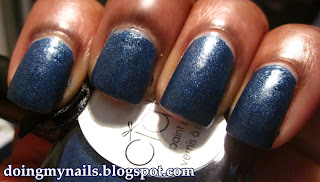 Regatta is a denim blue with silver shimmer. It actually looks like it wants to go metallic, but it doesn't. The formula on this was thick, but highly manageable. I did two coats cause I had a few little bald spots after the first coat, but nothing major. This dries relatively okay and to a matte finish, like the first picture. Adding top coat makes it shiny, but I think I like the matte look better. 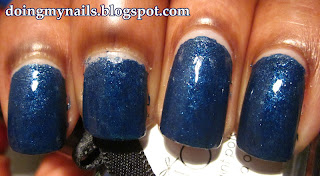 Hmm...that's about it with this polish. I've had it on for a day now and, unlike other mattes, it hasn't chipped yet. I'm on the fence with this one. It's a lovely polish in every regard, but I don't think it's anything near unique. In fact, I think I have one of the OPI Suedes sitting in my untrieds box that's like this. Or maybe I've worn it before. Either way, I'm pretty sure there are quite a few mattes out there that looks like this. With that said, this is, again, a really nice polish. Hmm...that's all there is to say.
Posted by BMR at 11:30 PM